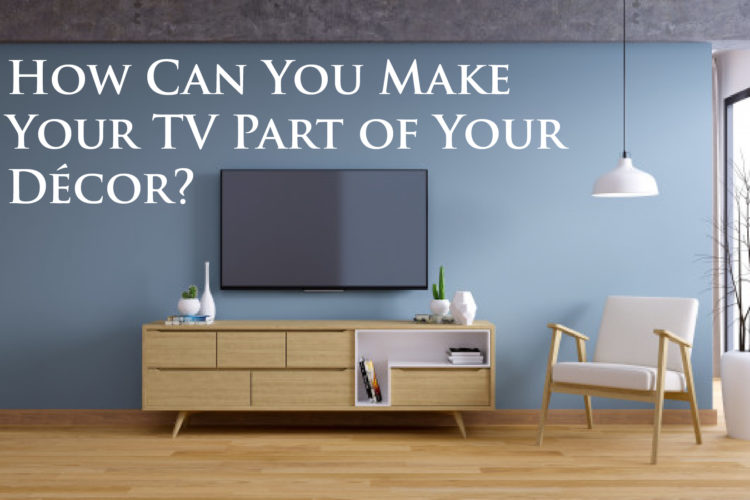 How Can You Make Your TV Part of Your Décor?

Picture the perfect entertainment room. The sofas are large and luxuriously placed one slightly above and behind the other…there are built-in cup-holders as well as easy-to-reach side tables. The soundproofing is flawless, and the windowless walls invite perfect darkness for the all-immersive movie experience. The speakers of the sound system are hooked up to Alexa so you can send voice commands to turn the oven off when dinner’s ready…let the movie watching commence!!

Of course, watching will take place on that ENORMOUS screen—oh, what a sight!

Let’s be honest…this isn’t the reality for most households. In fact, in many cases the TV is out in a family room for the world to see. But…it’s kind of an eyesore.

Almost every household has a TV in a communal family space; and for most of us, it’s located smack dab in the center of a wall in the living or bedroom! No wonder it lacks any look of elegance or class…

The question, of course, is what can you DO to ether camouflage the TV or doll up the wall behind it? How, exactly, do you incorporate a television into your layout or décor?!

A television is RARELY considered a design feature…but we still have to think about how we use the space in our home to get that design right. We have to be honest with ourselves, too! Who doesn’t like to relax on the sofa with some on-demand viewing? And as long as that’s the norm, we can work to make more creative efforts to weave the TV into a beautiful design that you’ll be proud of!

Here are some things to consider:

First: WHERE do you mount the TV?

The first instinct in many homes is to mount the television front-and-center above the fireplace. If you even HAVE a fireplace, you’re setting the TV up to compete with that classy feature. Which do you want to be the focal point of the room? (Spoiler alert: you can’t have two focal points, or else neither is a focal point!)

You also don’t want to hang the TV on an otherwise-empty wall…how undignified.

Instead, my first words of advice are to balance things out and consider your television just another element of the room. Imagine tying the TV into the décor on the same wall by playing off its color, for example. Do you have a classic, black-framed TV? Hang it within a coherent design that has some other black to play off of! This way, you can avoid the television becoming a purely “functional” (and consumerist) feature of the room. 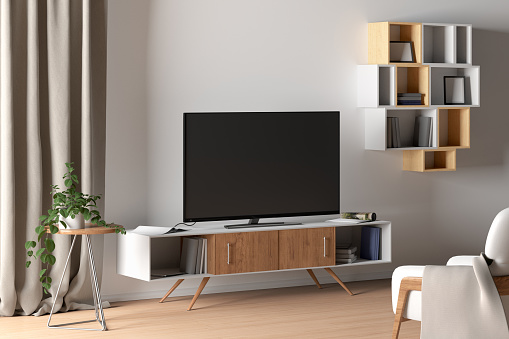 Wherever you hang your television, the décor on the wall around it is key to avoid that dreaded eyesore effect. For starters, you could try a mixed media wall. You can mount framed art or ceramics or even decorative objects like vases and plants around it. The three-dimensional aspect of this kind of décor turns your TV into just another puzzle piece in an interesting wall instead of a blemish in your style!

TIP: Try focusing your media around a single color scheme to make it EXTRA artsy. This is PERFECT for rooms with long walls or high ceilings…

Though most televisions are black or a dark, dark gray, you can play off the exact shade in your cabinetry for a BEAUTIFULLY classy integration! By picking a cabinet stain of a similar color, the TV will feel like PART of the design instead of an addition that draws the eye (in a bad way) later…

Not sure what cabinetry would fit your room’s existing style? Take our interior design style quiz to put your favorite styles into words! 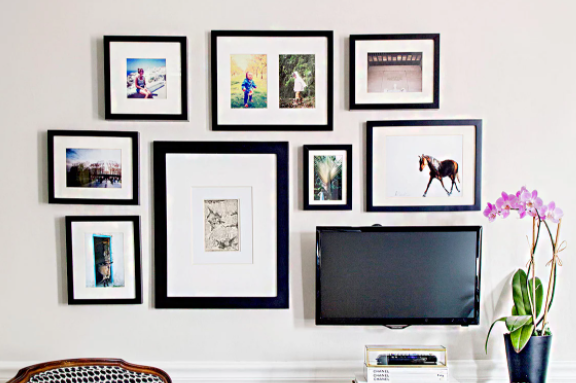 A play off the media wall idea is to create a grid gallery that your TV can play a part in. This is where you “disguise” the television as another item in a puzzle-like series of frames. The other framed items might be photos or artwork, or even framed movie posters for some eclectic character…you can opt for a darker wall color, too, to help the television blend in even more.

This is one of the easiest ideas to personalize, too. As you get tired of certain photos or artwork, you can easily switch pieces out. Use a grid layout with frames of roughly the same size to make this extra versatile.

The grid gallery is ESPECIALLY stunning wherever you have enough space to make a real gallery out of it…I’m talking BIG.

When all else fails…hide your TV inside a cabinet!

Of course, if you simply don’t want to look at your television when it isn’t in use, you can always hide it away in a wall cabinet. I have just a couple tips to add for this one:

1: First, even if your TV’s hidden, when those doors are open you might want the cabinet colors to match the color of the TV. This effect is just SO attractive…and it really helps you get “lost” in whatever it is you’re watching.

2: And second, be sure your cabinets are installed in such a way (and with the appropriate décor around them) so that the open doors aren’t inconvenient while you watch…imagine someone coming around the corner just to run into a cabinet door hanging open!

This solution is perfect for more formal spaces where a TV would look like it’s from a different century. It’s also especially nice in bedrooms so that your TV doesn’t have to be the first thing you see in the morning…

Entertainment walls have become a HUGE thing ever since the flatscreen TV became the norm…in fact, for most households, the placement of the TV becomes a more crucial focal point than the fireplace!! 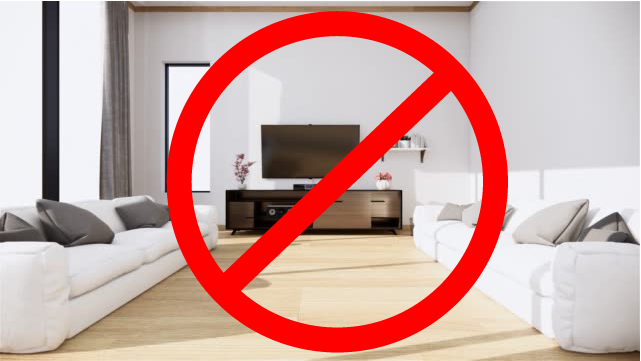 Ultimately, you HAVE to hang your television in a place that gives you the best angle to view it from…that’s what it’s for, after all. You want to enjoy using it!

The interior “reshuffle” you do so your TV doesn’t end up an eyesore requires a little creativity, but you can also employ the help of a registered interior designer for EXTRA creative ideas. Maybe you have games and console storage you also need to take into consideration. Or maybe you have a VERY small wall that needs some extra help. Whatever the case, I would love to make that design work perfectly for you…you can even hold your design consultations entirely online now using our new edesign services!!

Reach out to me today…and your TV experience could be revolutionized…to everyone’s delight!!