Remodeling a bathroom is a BIG deal. It’s usually one of the smallest rooms in your home, yet it plays a huge role in your day-to-day (and an equally huge role in the value of your home).

Your bathroom is a space that’s smaller than your kitchen but arguably even more fundamental. (Would you rather do without a bathroom or a kitchen?!) This combination of small and CRUCIAL makes for a very tricky remodel, often pushing homeowners in the opposite direction of the luxury and elegance they need.

This bathroom remodel in Flower Mound is the perfect example. Throw one look at the “before” photos and you’ll see…this builder-grade space was totally utilitarian and in no way radiated the kind of luxury the owners were after.

I’ll tell you a secret, though. Behind every beautiful bathroom, there was ALWAYS some tiny or non-functional space to begin with (or a space that was just plain UGLY). This is how bathrooms are generally built, and it’s only after “living a little” that we clue in to what we really want…

With a little labor, even THIS level of builder-grade bathroom can be transformed into something “wow” worthy. Follow along and learn how we did it here!! 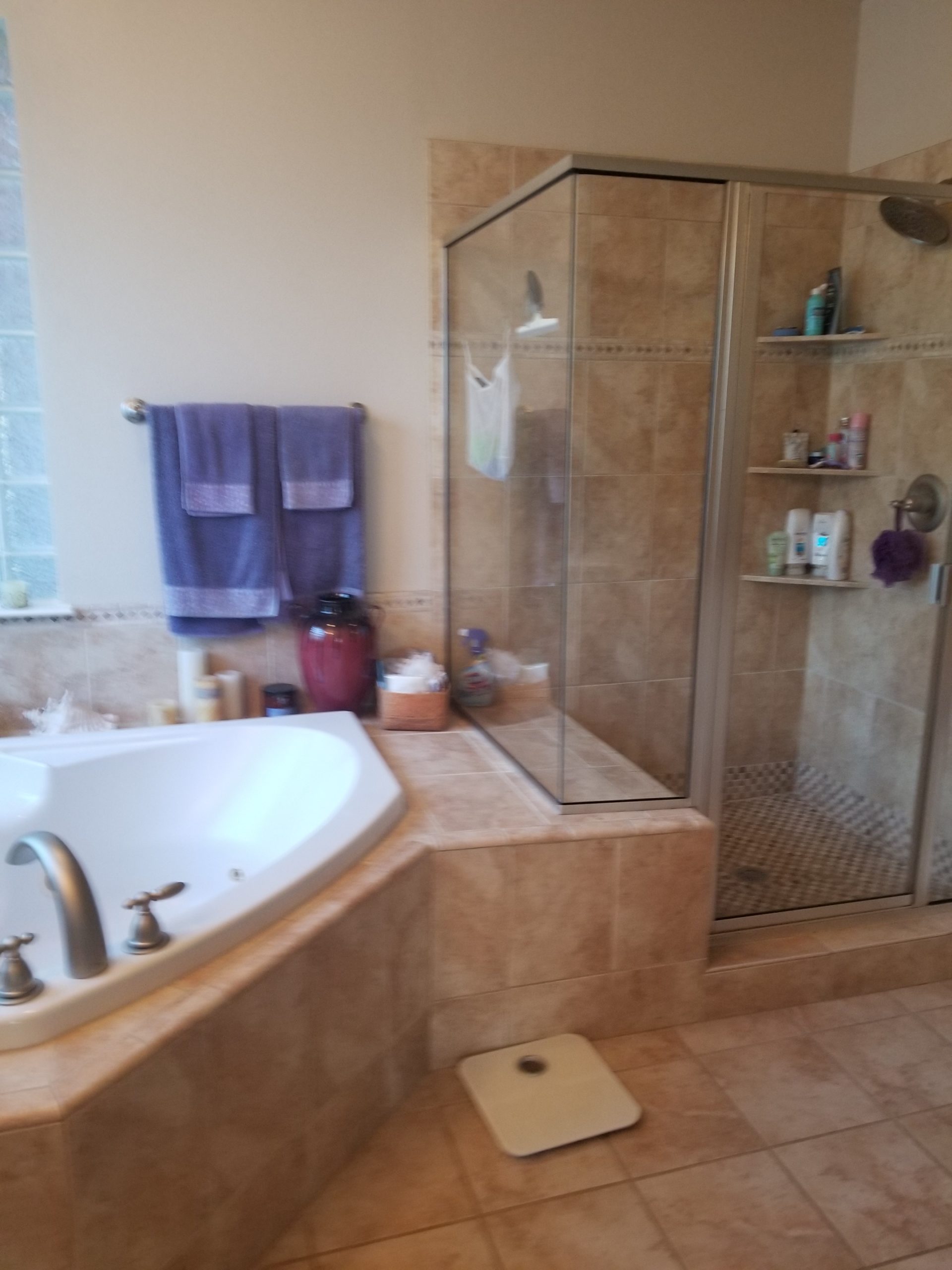 This original bathroom felt unsettlingly cluttered…the big box shower plus the gargantuan tub surround made up at least HALF the space. Just walking into this bathroom, you could feel EVERYTHING tighten in around you…

Instead of being a space where the homeowners could relax (or even breathe), it felt more like a storage unit that happened to have a shower.

We had a LOT of design choices to make with the owners, some of them very hard. Our priority was to open the space up as much as possible without actually making it bigger. The transformation you’re about to see does not have ANY added square footage… 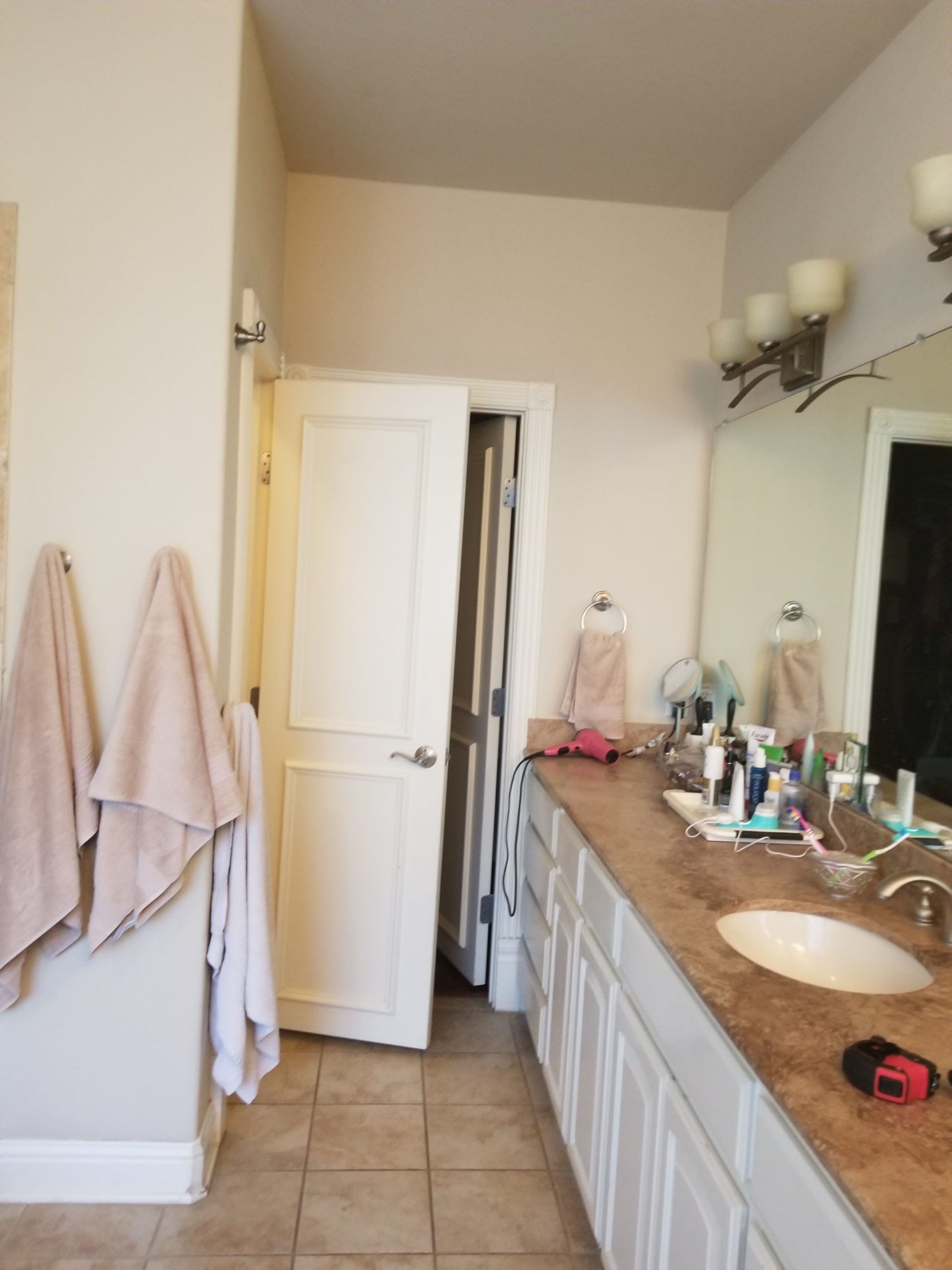 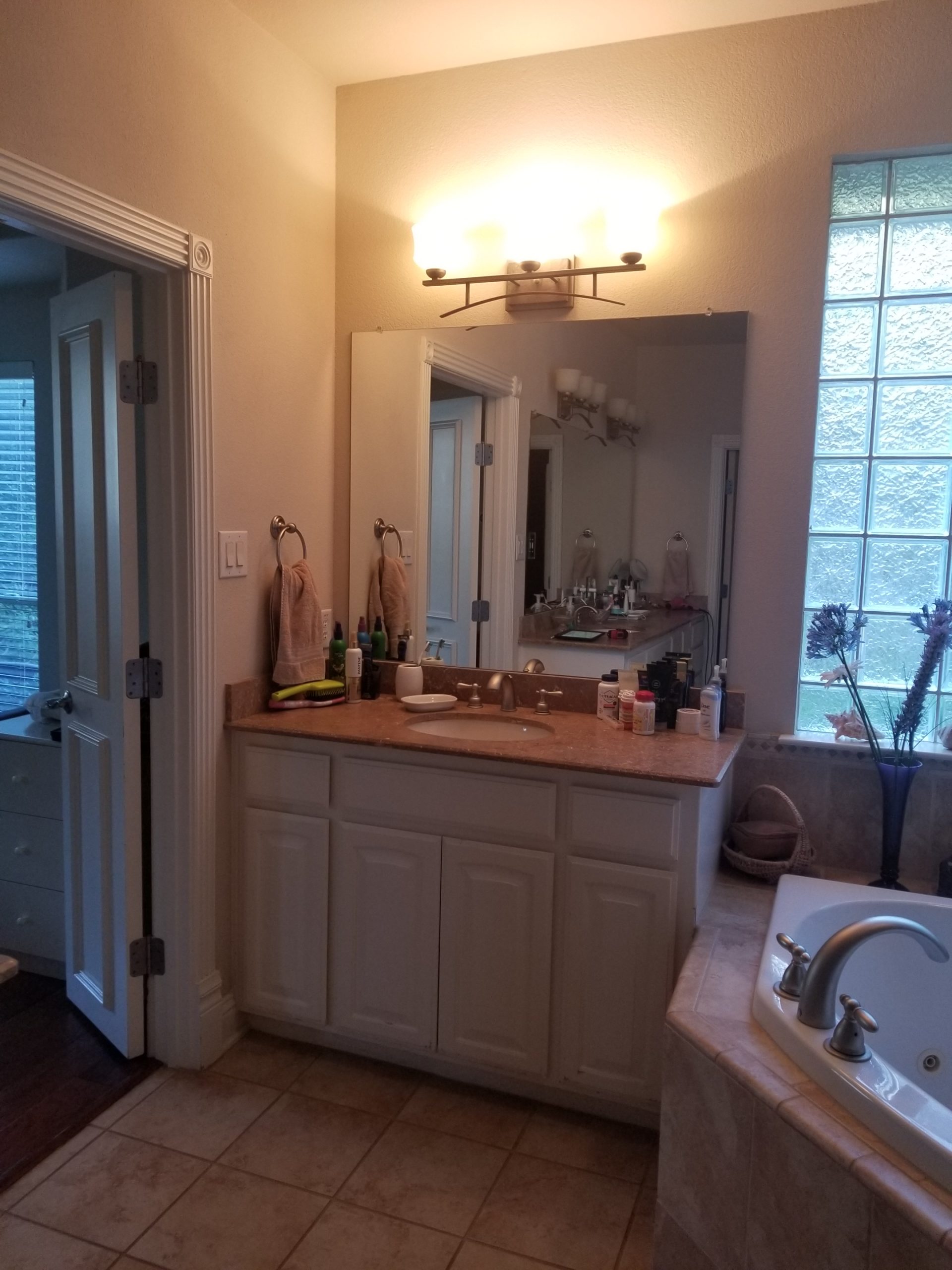 One of my favorite parts of any remodel is the design phase…obviously, it’s a part of the Signature Process that I play a big role in!! Rob’s 3D renderings steal the show, though, because these serve as the homeowner’s first chance to really visualize their selections in the space.

In the design phase for this bathroom, we also loved going through all the other steps, too, like establishing the homeowner’s priorities, making selections, and reviewing the 3D renderings…it really is an exciting part of your remodel!

This family’s main priority, of course, was to make the cramped bathroom feel bigger. They also wanted to enjoy that spa-like luxe feel. To achieve this, we were going to remove awkward angles and oversized elements to open the whole thing up. 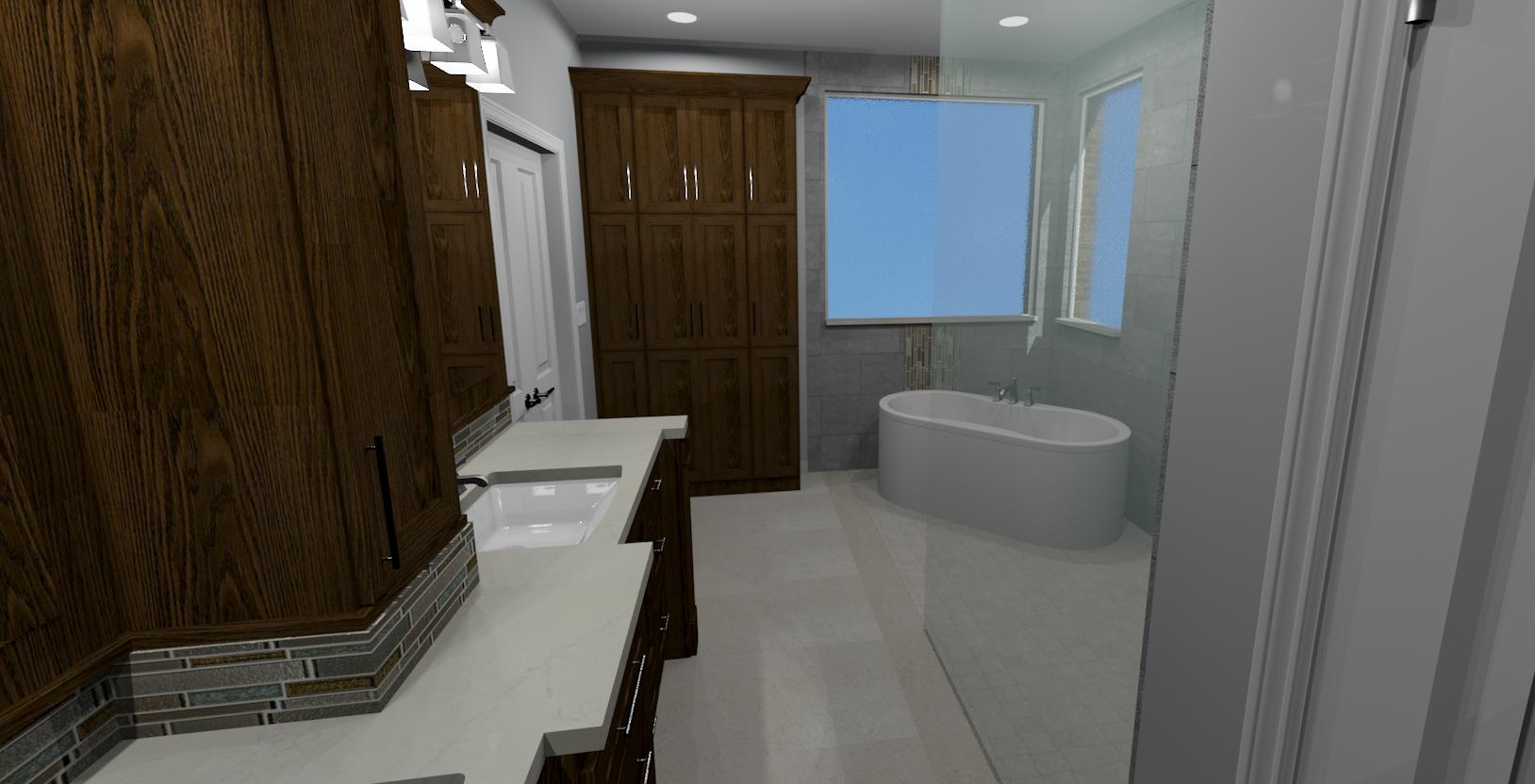 Rob came up with some phenomenal designs, too, all of which would lean into his craftsmanship skills to bring greater function into the space.

For example, in these renderings, see that pane between the shower space and the rest of the room? It’s glass. This would instantly make the space feel larger. 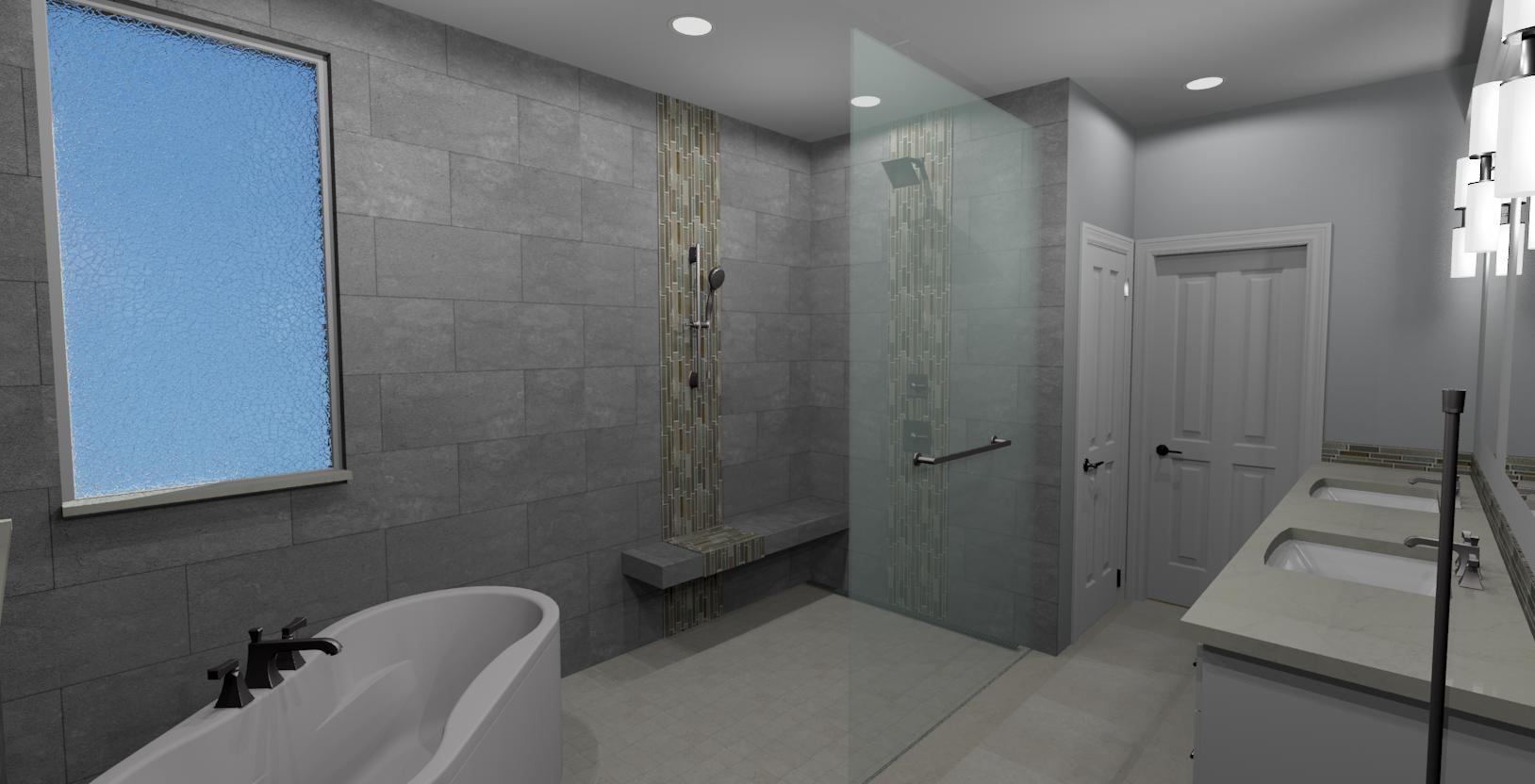 Even details like the installation of the bench in the shower would save space. You can’t see it yet in this early draft rendering, but the bench in the final design appears to “come through” the glass. I thought this was a GORGEOUS touch!

Rob’s creativity and design knowledge have gotten attention before…and in this bathroom design, you can really see why. 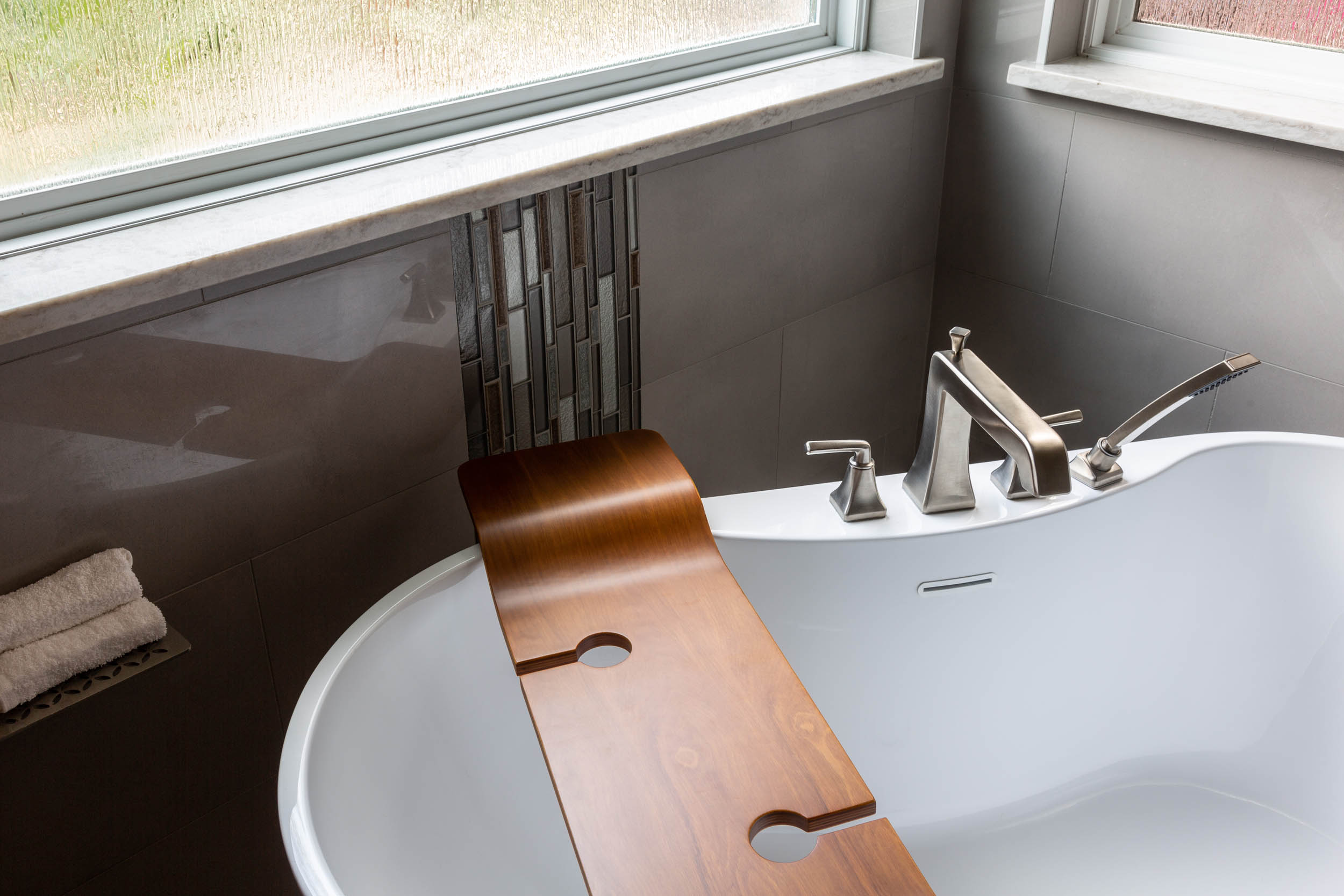 Something I have to mention…that TUB!

For some homeowners, it makes a LOT of sense to ditch the tub when they remodel the master bath. A bathroom that’s already too small in a household where no one is into baths provides a wonderful opportunity to save space.

However, there ARE those of us who love our baths! This homeowner wanted to keep the tub, too.

It was our task to imagine how it the tub area could be designed differently. With the owners’ existing inspirations, we drew up this seamless space where the bath no longer had a surround, but instead would perch on top of a tile design installed around half the room. It’s breathtaking how it flows seamlessly into the shower.

The result was the luxury feel you would absolutely expect at a spa.

This type of open, tub-to-shower design was nothing less than a blessing for this small space. The glass, too, was a stunning visual element that showed the new seamless space off.

Speaking of other seamless (and curbless) showers, be sure to download our new quarterly magazine…in this Spring 2021 edition, we talk EXCLUSIVELY about bathrooms and have an article devoted entirely to curbless showers!! 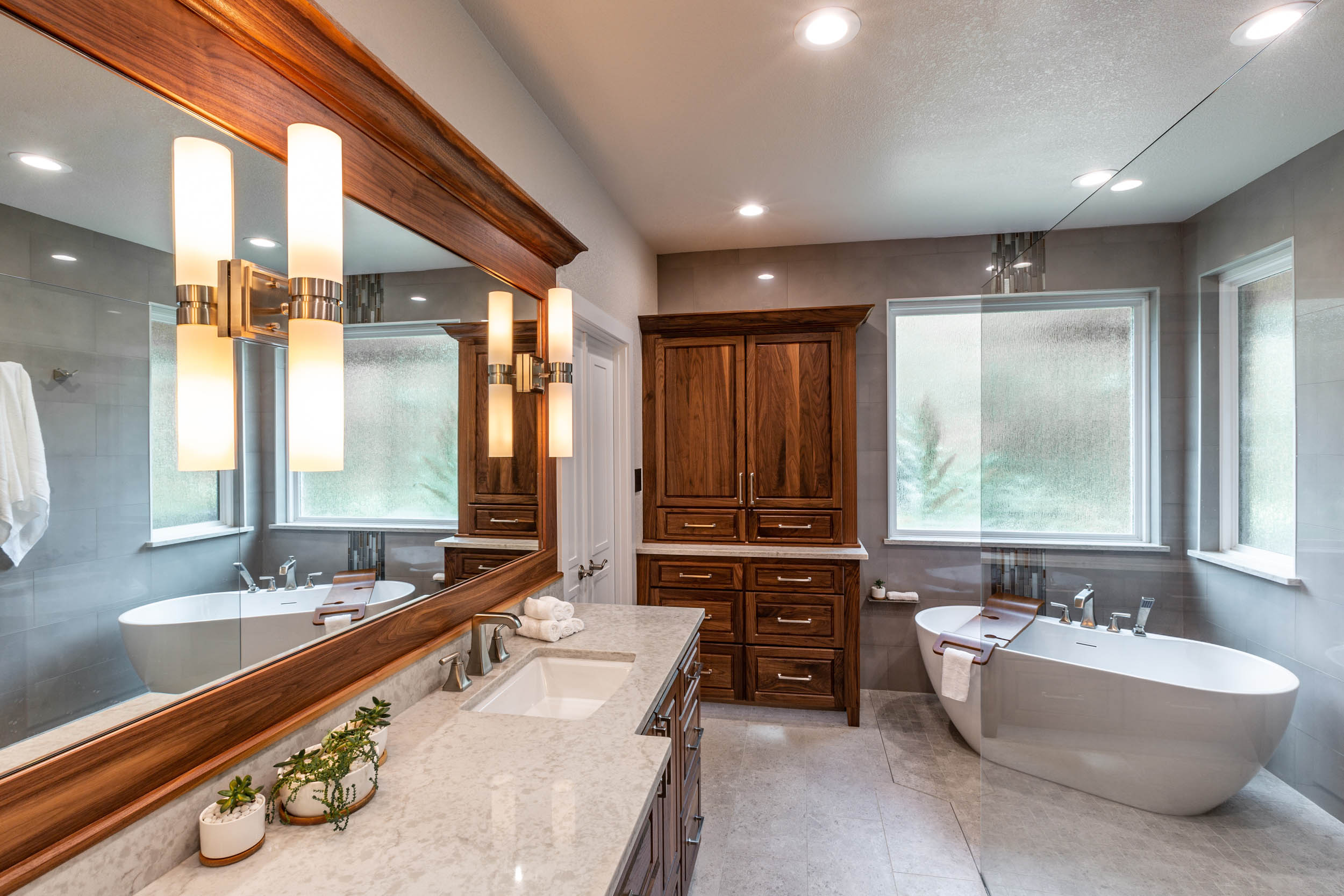 I admit it, the bath-to-shower space is what I most like to show off in this bathroom since it was central to how we opened the space up…it was NOT, however, the only way we made this master bath more functional.

For instance, the cabinets in this bathroom remodel were COMPLETELY redesigned. The beautiful walnut is just the beginning…inside, each shelf behind every door was designed with this family’s needs in mind.

My favorite touch, for example, was where we installed one of our signature pull-out grooming drawers. 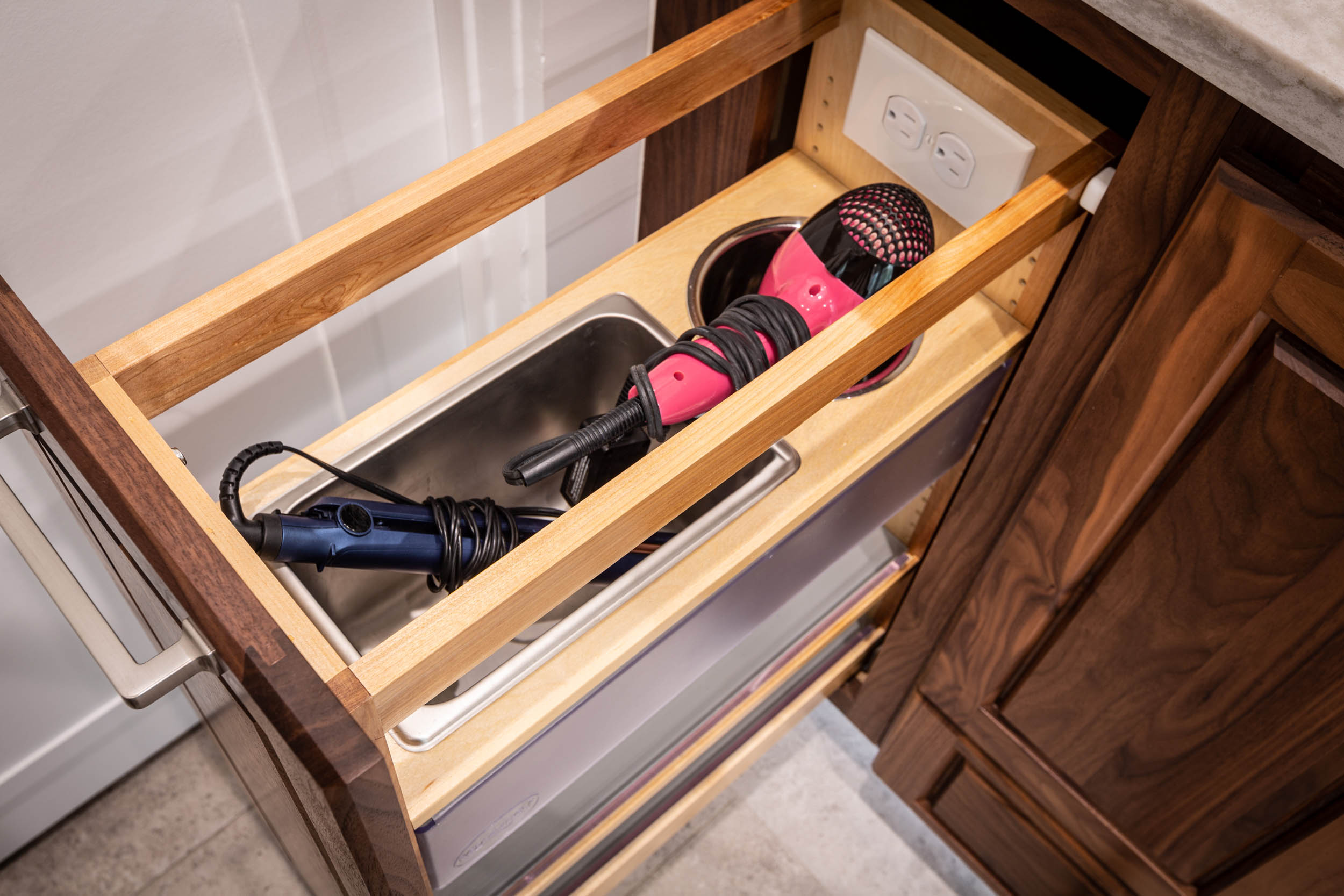 This is just one example of the kind of functional design you need for a bathroom to be as comfortable as you deserve. If you’re spending the money on a bathroom remodel, it ought to meet YOUR needs for your lifestyle, shouldn’t it?

For another recent remodeling project with GREAT cabinets to show off, take a look at this full gut kitchen remodel.

The original bathroom in this home was builder-grade and COMPLETELY utilitarian. It was cramped…it was dated…and above all, it did NOT support the lifestyle, look and feel this family was after.

Despite the minimal structural changes, this bathroom started on the small side and ended up being a spa-grade space that truly sets this home apart. Everywhere you look, selections and elements catch your eye in a seamless design that we love as much as the homeowners did.

It’s my hope now that every time they walk in, this couple feels like they’re at a spa resort. The luxury hotel feel is one they’ll be able to enjoy as long as they’re in the home, too, because this bathroom was even designed with “all ages” in mind!

Take a look at the video below and the rest of the “after” photos from the transformation!! 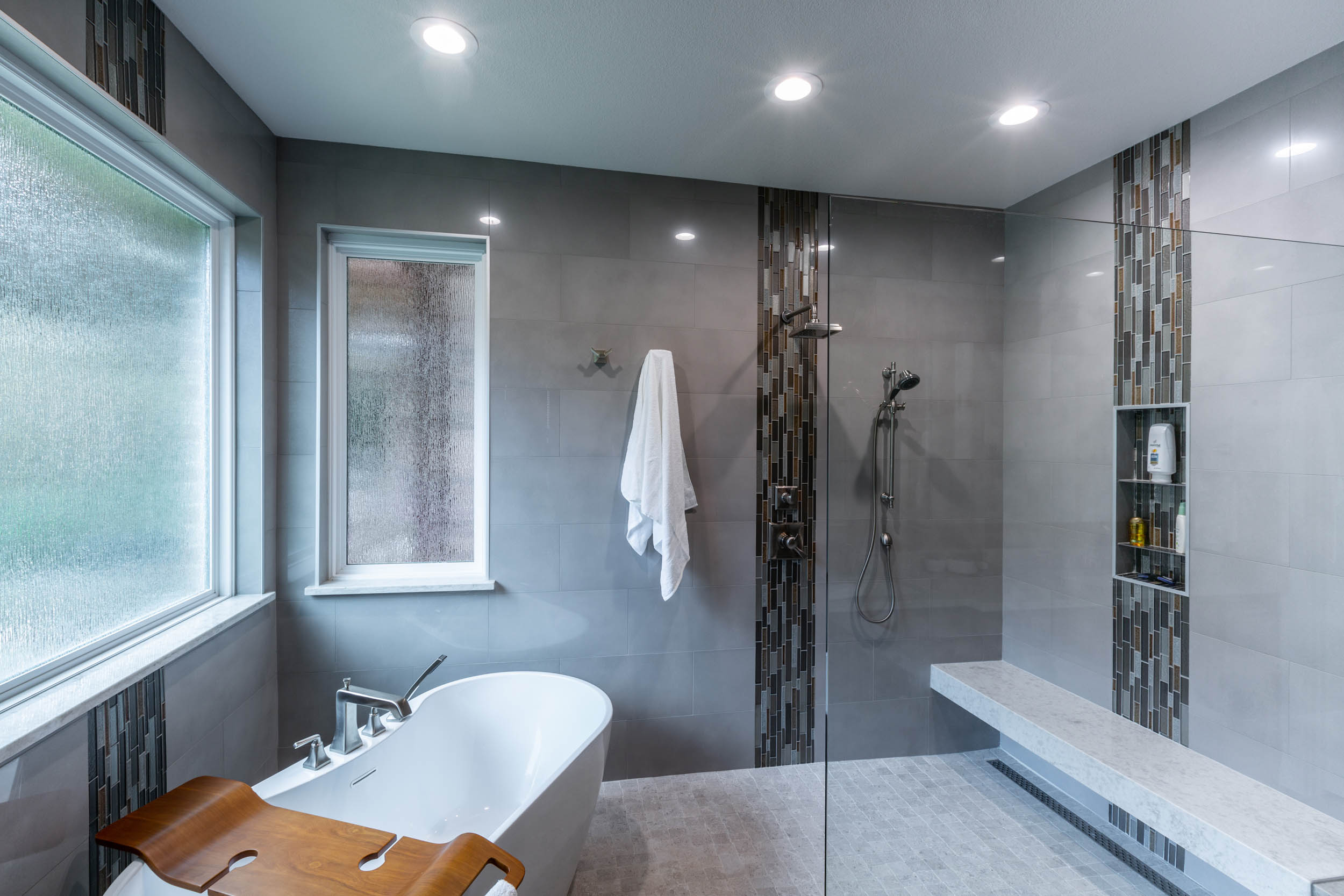 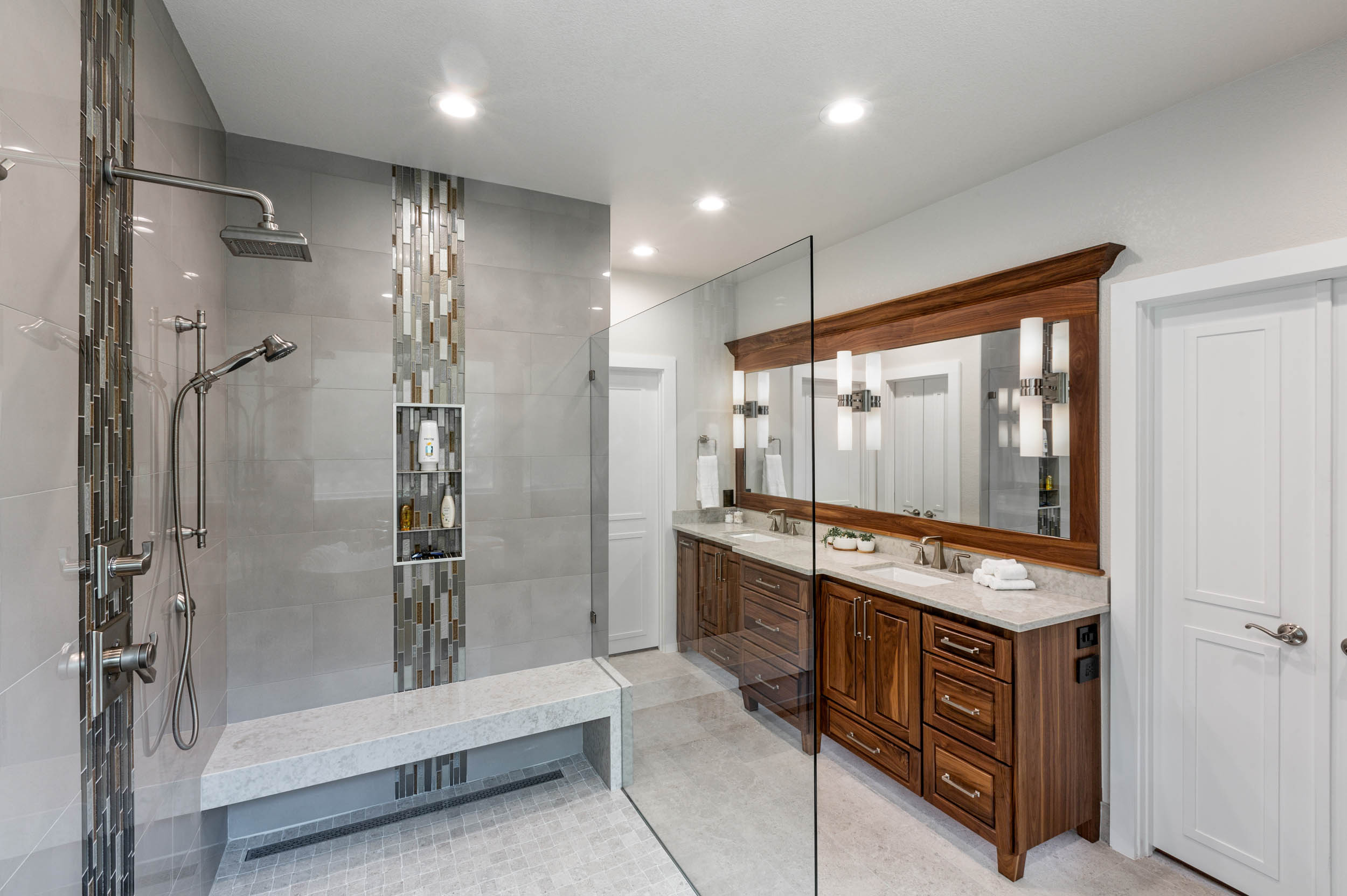 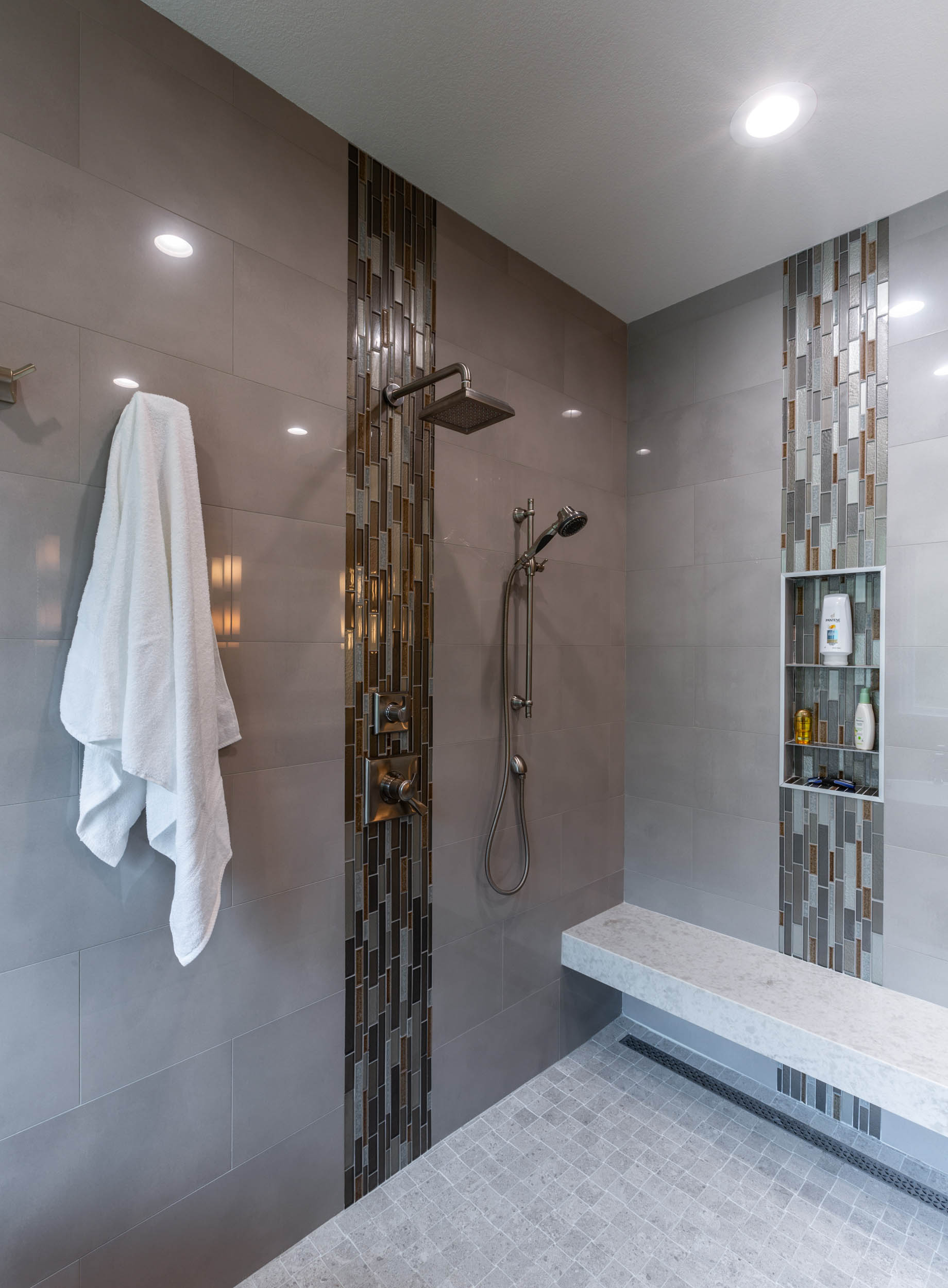 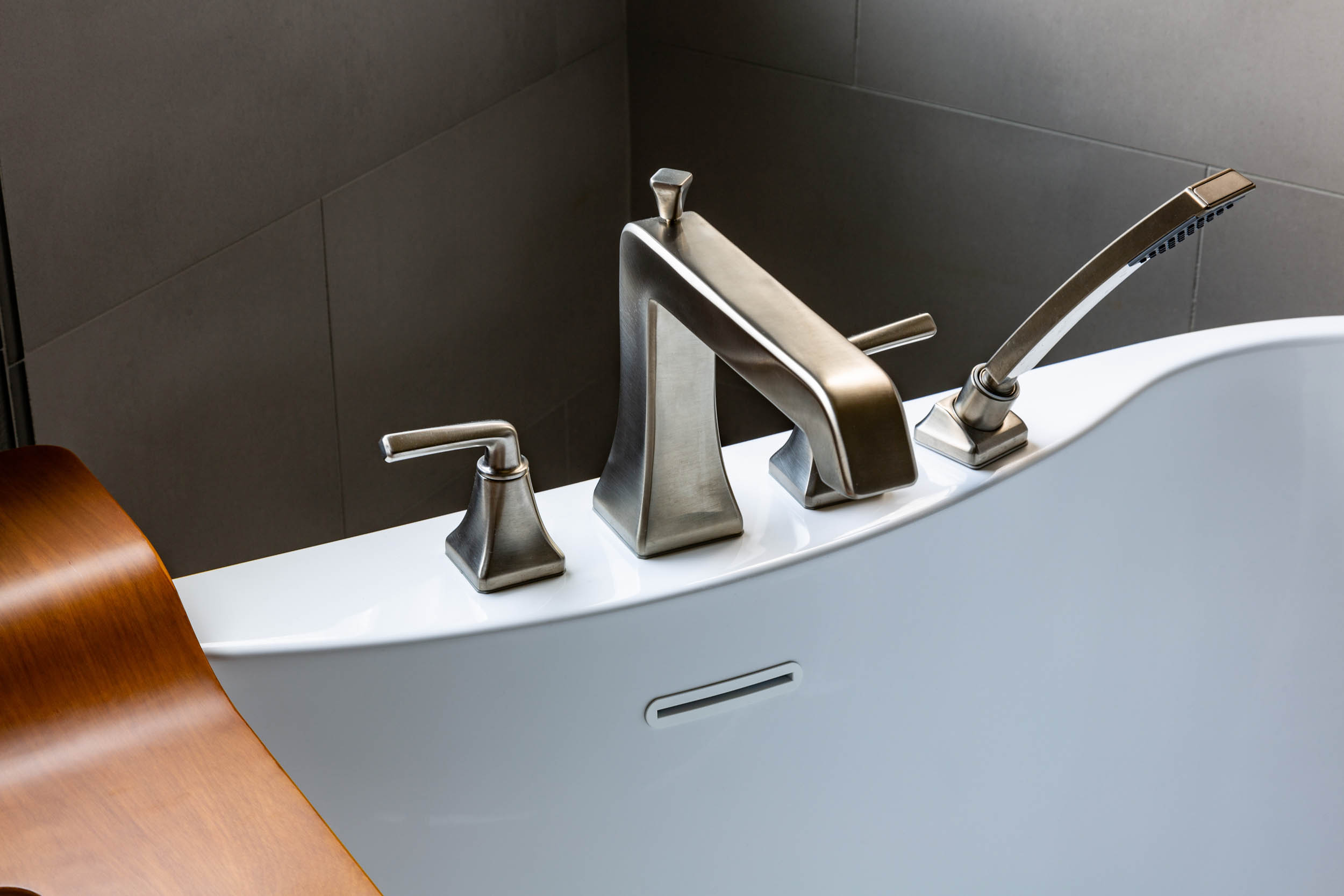 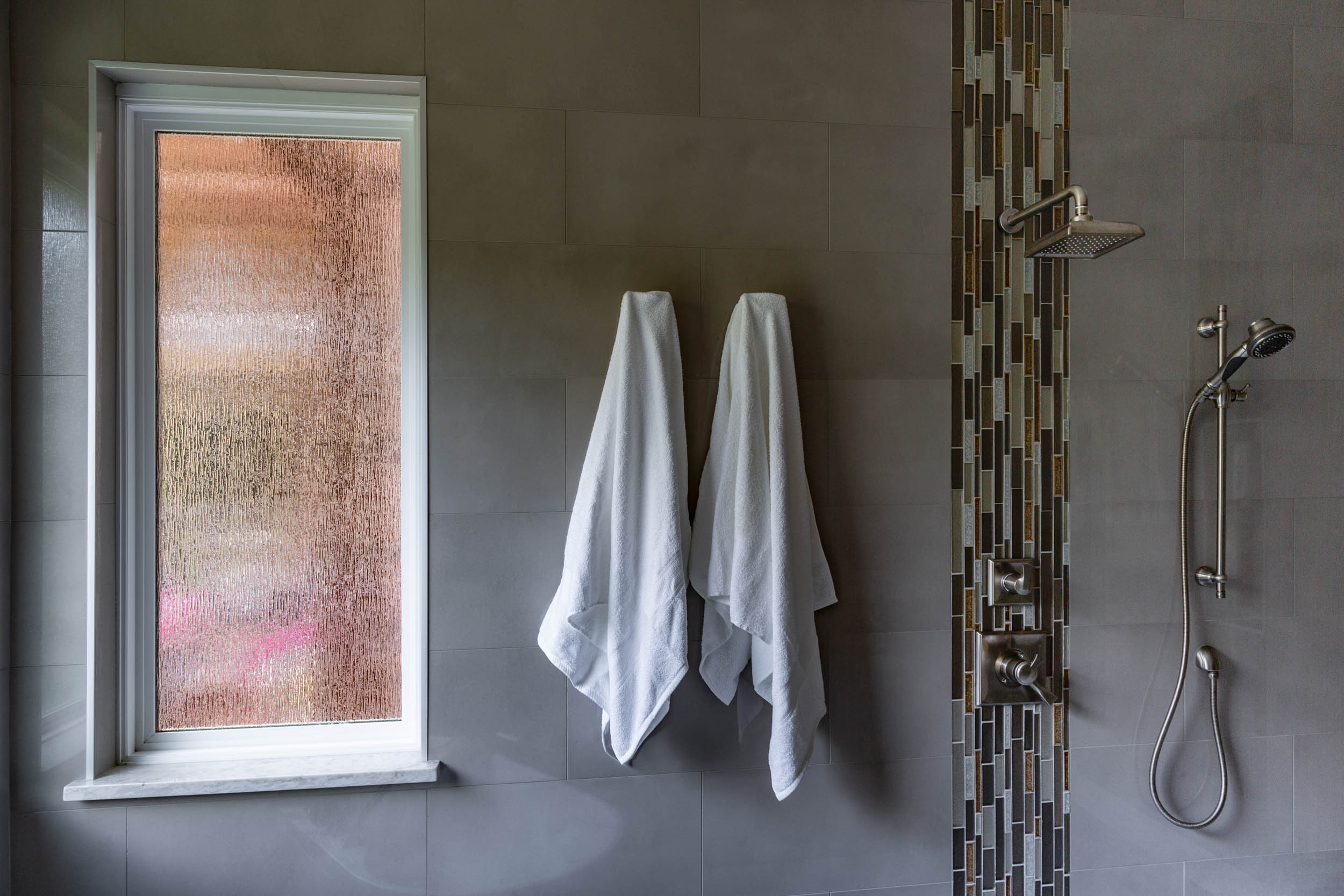