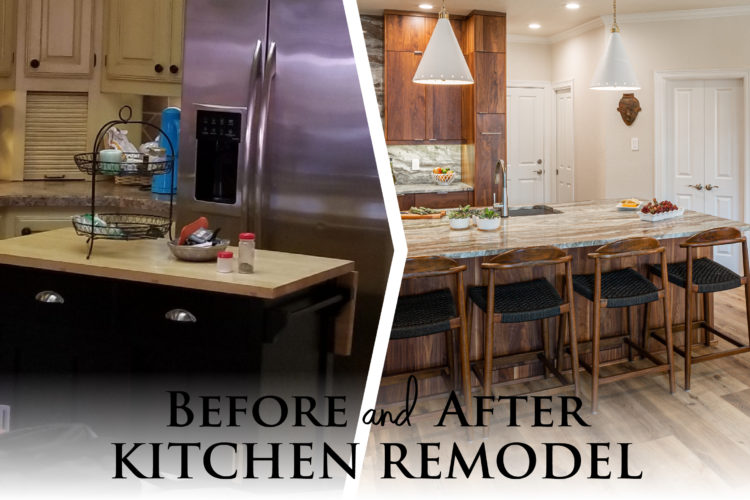 A Kitchen Remodel with the Ultimate Custom Cabinetry

There are some traditions we really like. There are other traditions we like so much that we base our whole lives around them! Then, there are the traditions that phase out and MUST be done away with, or we risk stagnation and a LOT of frustration.

In the context of your home, the interior design style that we call “traditional” generally gives off a cozy and predictable look and feel. The flow of rooms is what you might expect in an older home, perhaps even a home from your childhood. With features like ornate woodwork and sturdy furniture, it’s easy to see the appeal of this style in certain spaces…

(Not sure what your interior design style is? Take our quiz for an instant result!)

When it came to this North Richland Hills full kitchen remodel, however, the appeal of the “traditional” design style had worn off. The kitchen was original to the house, and it was no longer practical. At the same time, the rest of the house was so adorned in traditional design that the homeowners didn’t want to depart too much from the feel of the adjacent spaces.

And so it began… 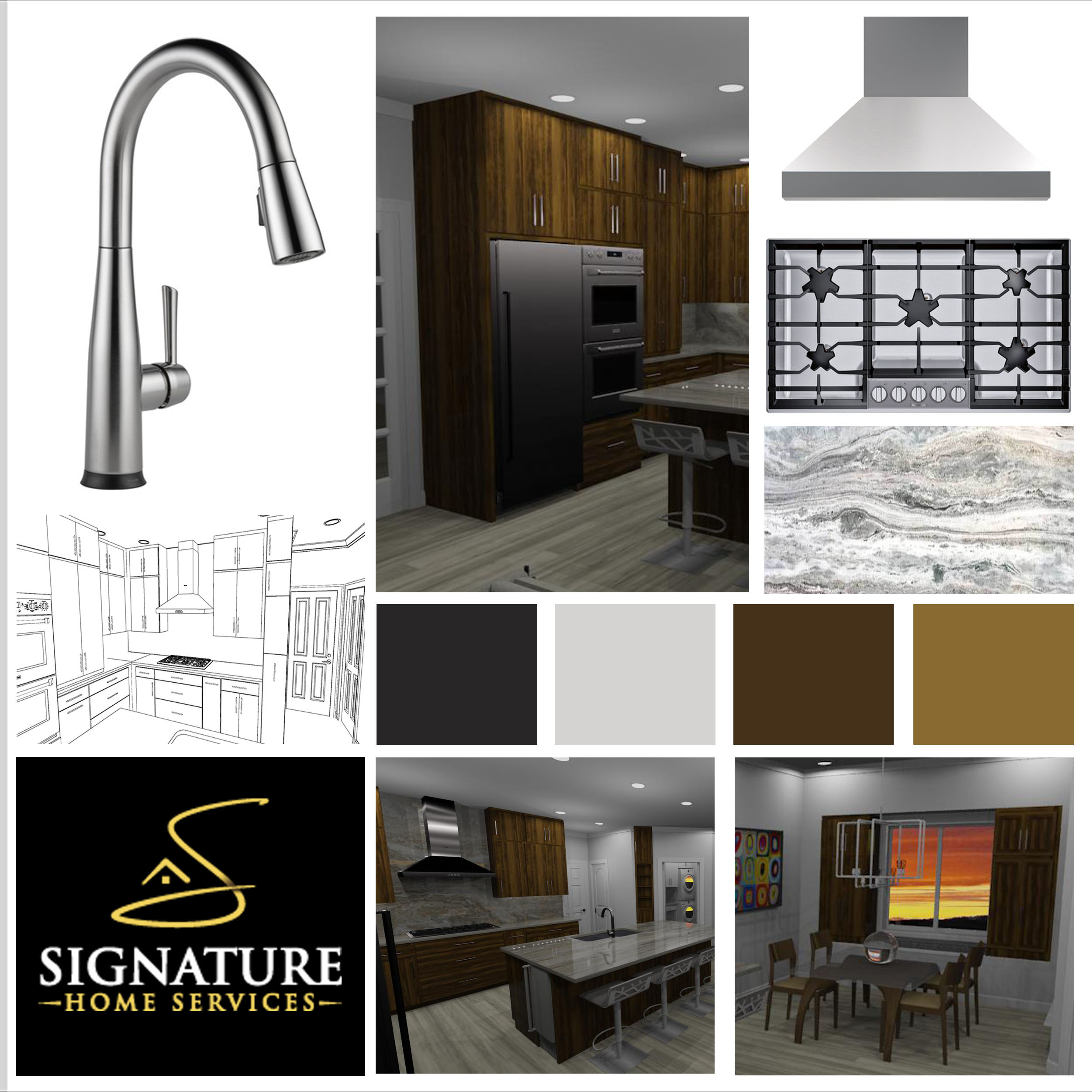 On a mission to update this kitchen’s look while staying true to the more attractive features of the traditional look of the home, this kitchen remodel started with our usual design consultation. Conversations were had! Concerns like storage were discussed extensively…and when it came to making selections (one of my FAVORITE parts of design), every detail was chosen based on how the family wanted to live in their new space. (Read here for more on how to select kitchen appliances, for instance.)

The lights the wife chose were pure eye-candy…just wait until you see them!!

By the time we got into demolition and construction, the homeowners knew EXACTLY how their new kitchen was going to look, and they were almost as excited as we were!! (OK, maybe they were just as excited, but when you see what our team was in for…you’ll know why we were excited, too!)

One of the first priorities in design was to OPEN the space UP. This kitchen had an adjacent breakfast nook and looked out into the living room, and the whole area needed to flow—for aesthetic AND practical reasons.

As for the island and custom cabinets, this ended up being as central in our design process as it was in the final kitchen. Originally, the idea was just to straighten the island out, but then Rob came up with the idea of flipping it…and then a WORLD of possibilities opened up. We were then able to move the door to the kitchen down further and make more space for cabinetry (which the kitchen was in DESPERATE need of).

(Read my article on who does and doesn’t need a kitchen island.)

Then, the idea was to make the space sleek…but not TOO sleek. We were mixing contemporary and transitional styles, while still bringing in pops of traditional elements from the rest of the house, like the marble backsplash and countertops. The drama of the full-marble backsplash would be intense since we were stretching it all the way up the wall behind the oven hood…

And the nook, OH the nook!! The breakfast corner needed some major work…and by putting more custom cabinets in to frame the area while leaving one central cabinet in the mix for natural light, the space would be completely transformed…

One of the most popular themes in kitchen remodeling today is to build in as MUCH storage as possible. Between all our cooking devices and table wear, not to mention the SIZE of our fridges and other appliances, kitchens have been trending bigger and with more custom cabinetry for a while.

This kitchen was a case in point.

Since we were focused on building in more storage, we turned to Rob to make the most out of the kitchen island. It had SO much storage on all four sides that it would be a MAJOR production feat to get it completed…it would have full plumbing and electrical, water filtration, an ice maker, the dishwasher, AND places to put outlets! We didn’t want to put the outlets on the sides, either, since we had cabinet doors all around…so the homeowners opted for the pop-up outlets that come out of the counter. These pop-ups also have USB connections!! 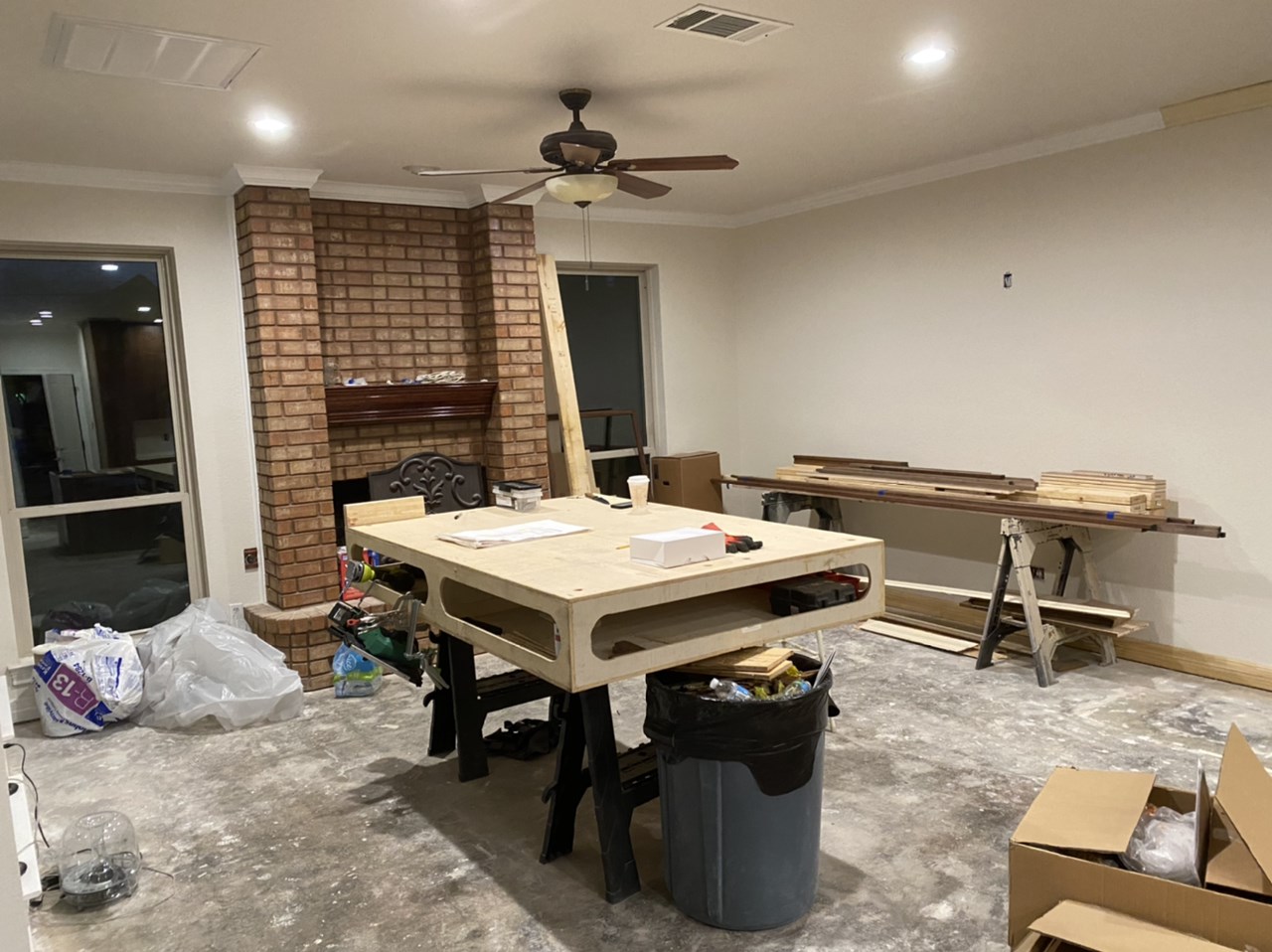 That island was made up of 23 different parts by the end of design. (To give you an idea, an average island is composed of between six and nine parts!)

As for the custom cabinetry, clean lines and maximum storage were the name of the game. All cabinets were European frame, which has a different installation procedure, but one Rob knows well…and the flat-panel doors would be NATURAL walnut, with no stain whatsoever.

One thing Rob ran into during production, though, was the ceiling. From one end of the kitchen to the other, it was off by about 1 ¼ inches, which of course Rob had to fix before putting the cabinets on. The whole ceiling was evened out… 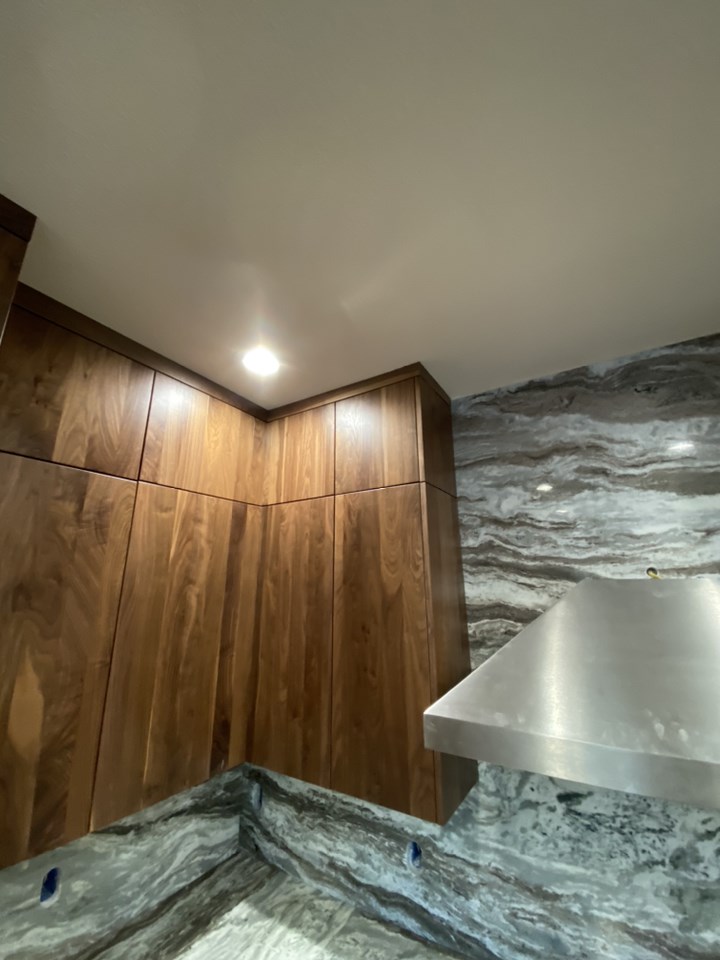 Another surprise in demo was when the guys ran into some plumbing challenges. Apparently, the plumbing was original to the house just like the kitchen was! The gas line put in wasn’t large enough, either, and shouldn’t have even passed code when the home was built…so Rob updated the gas meter and put special valves throughout the house to regulate the gas flow.

PRO TIP: These surprises ALWAYS happen, unfortunately! When you plan for something unexpected to come up, though, you can save yourself a LOT of stress and disappointment.

Back to the nook, when it came down to it, there were still some ongoing thoughts about how best to upgrade the space…originally, the homeowners thought that a short cabinet could go in with two small pull-out drawers for placemats and linens. But those cabinets could only be six inches tall with the design as it stood! That’s when Rob came up with the idea to replace the two windows with the smaller one in the center, giving them 30 inches on each side to put in beautiful flanking cabinets. Those cabinets had seven shelves each. 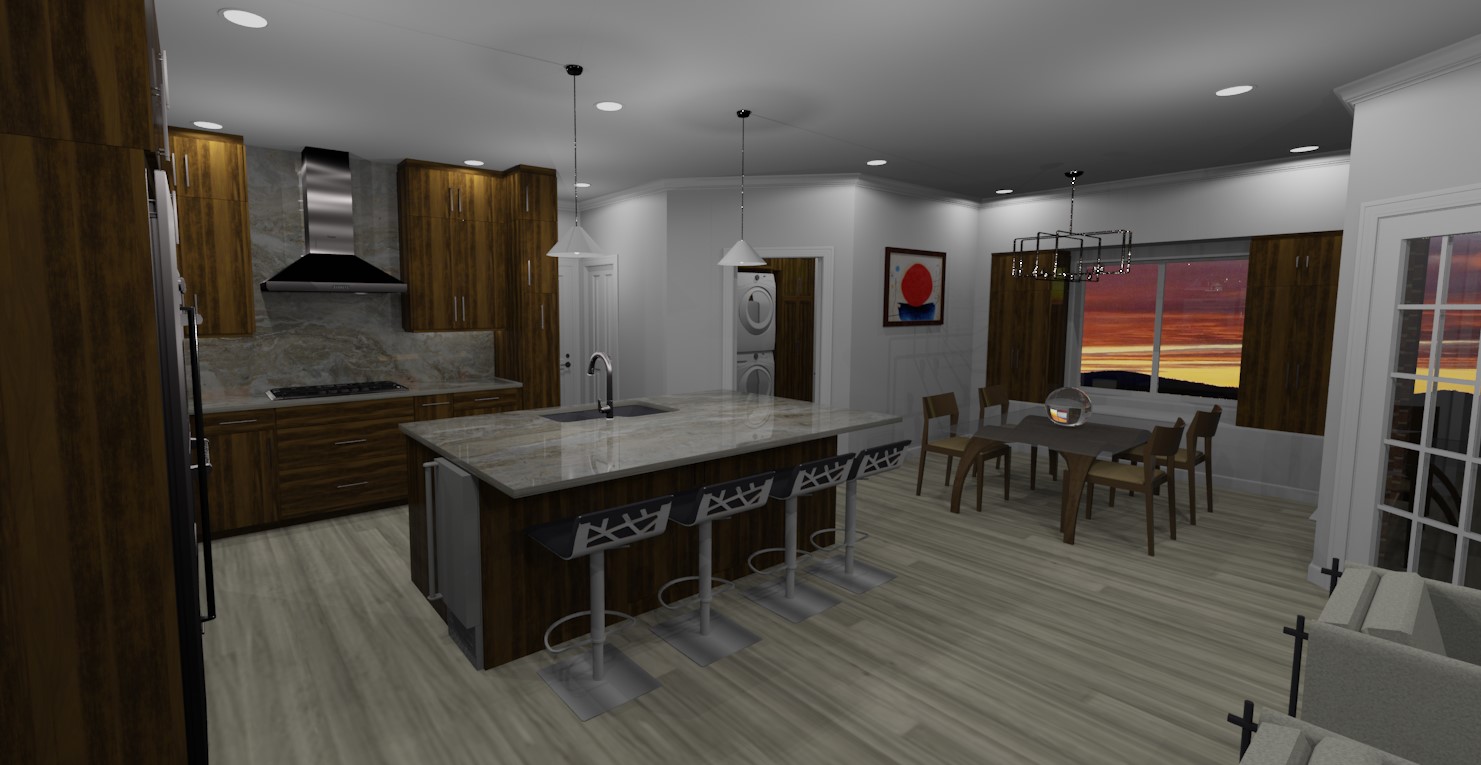 With custom cabinets, a custom and complex island, and LOADS of new technology installed, this kitchen remodel shaped up to be one we were proud of and the homeowners LOVED. It’s a lifestyle kitchen, not JUST a beautiful one! Scroll through the after pictures and be sure to tell us what you think!! 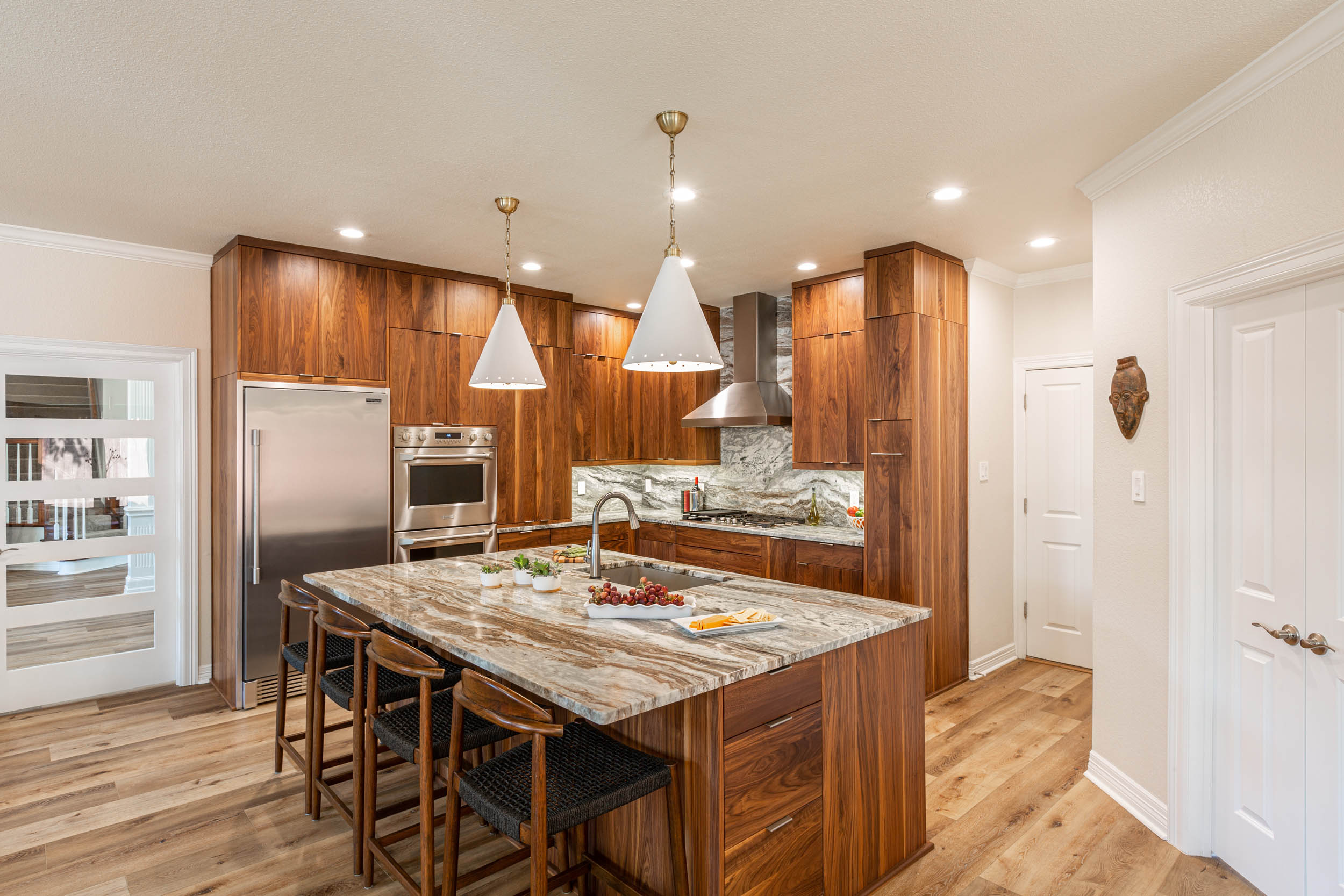 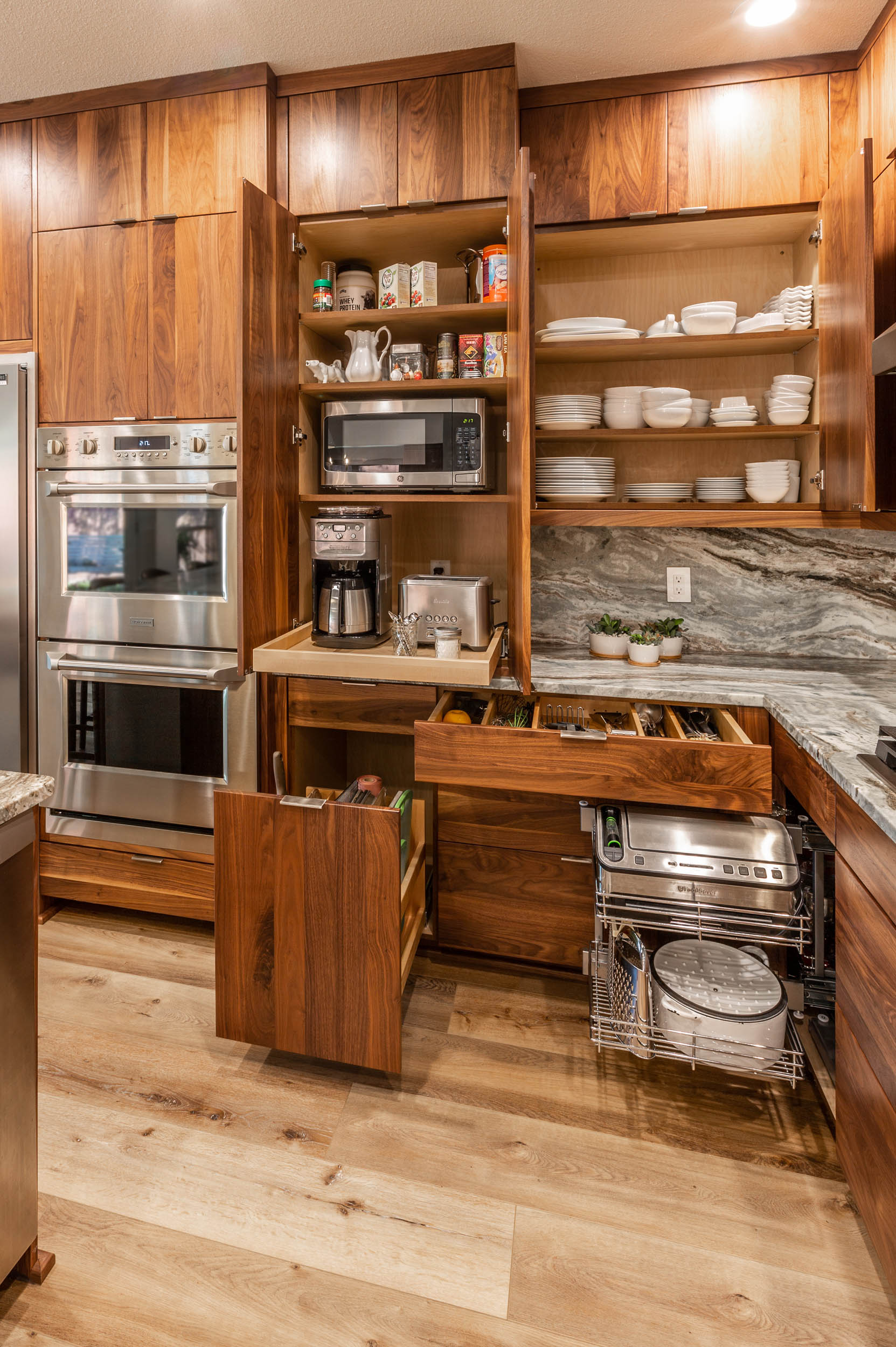 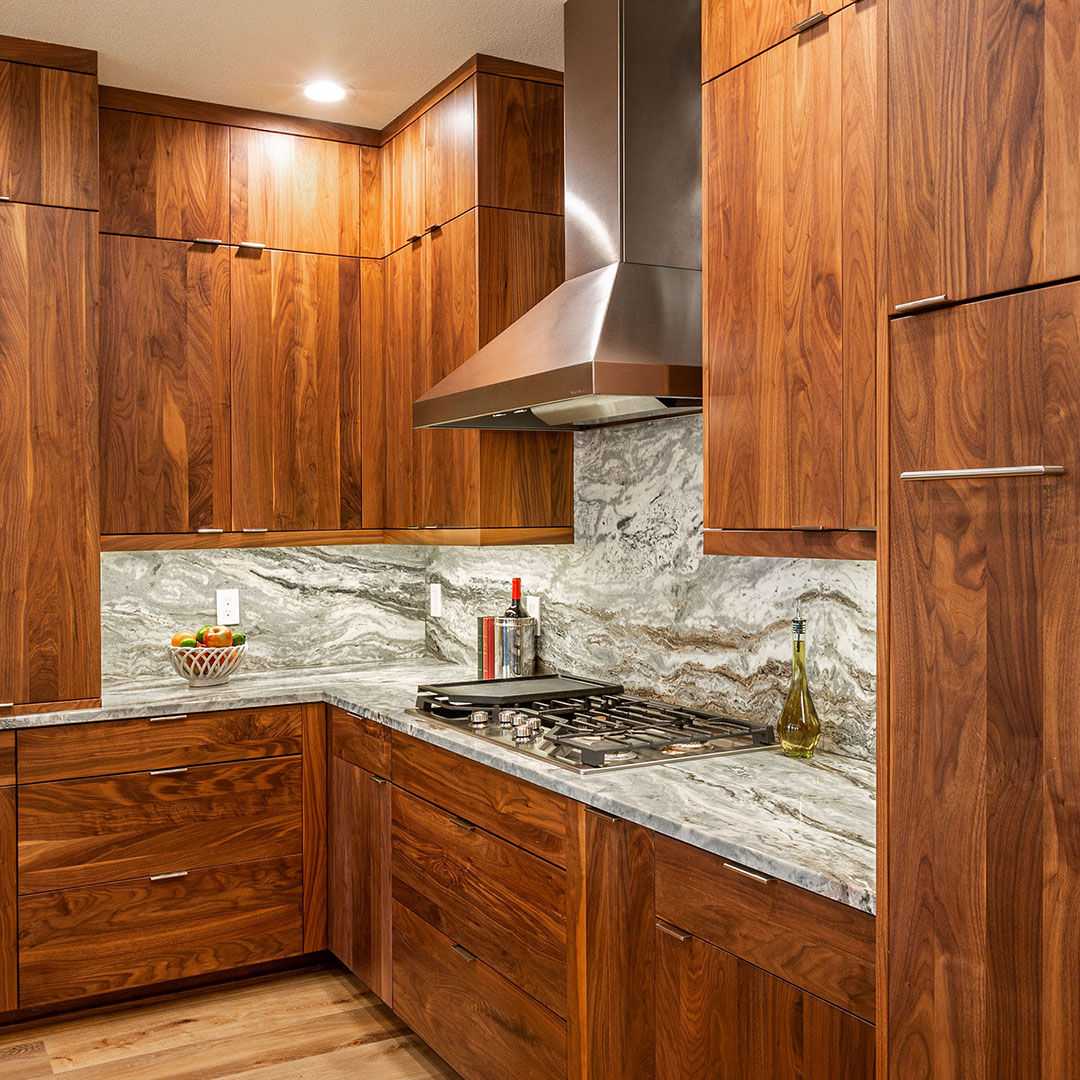