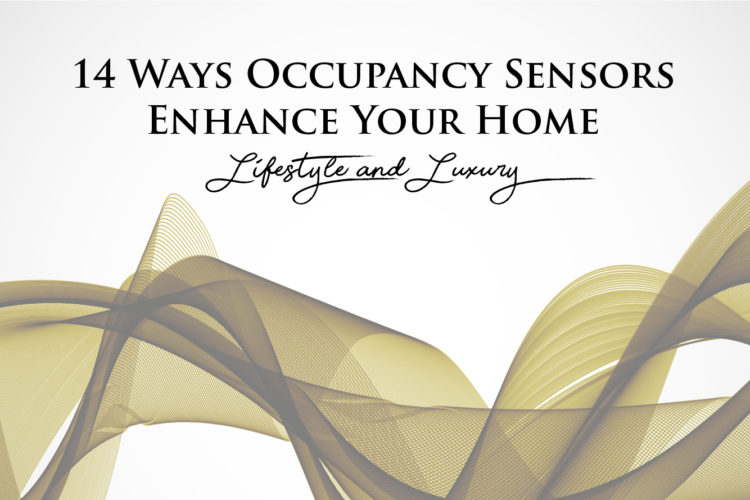 Occupancy sensors are electronic devices set up around your home that detect if someone is there. Motion sensors (one type of occupancy sensor) have been used for AGES outdoors—just think of floodlights in the neighbor’s backyard!!

In the home today, though, NEW technology has turned occupancy sensors of all kinds into the linchpin for next-level convenience and luxury…

These are just some of the ways that occupancy sensors can take your comfort, security, and enjoyment to a whole new level in your home.

Keep reading to get inspired…and decide for yourself what you’ll do first!!

What are occupancy sensors?

Occupancy sensors are low-profile wireless devices that you set up anywhere in or around your home. Different sensors detect different things, including movement, temperature, or the opening or closing of a door.

Next, those sensors tell other smart devices how to react.

Without you pushing buttons or getting up, or even needing to speak a command, these sensors detect and command for you.

Essentially, your house can run on autopilot…

Types of Occupancy Sensors You Should Know About 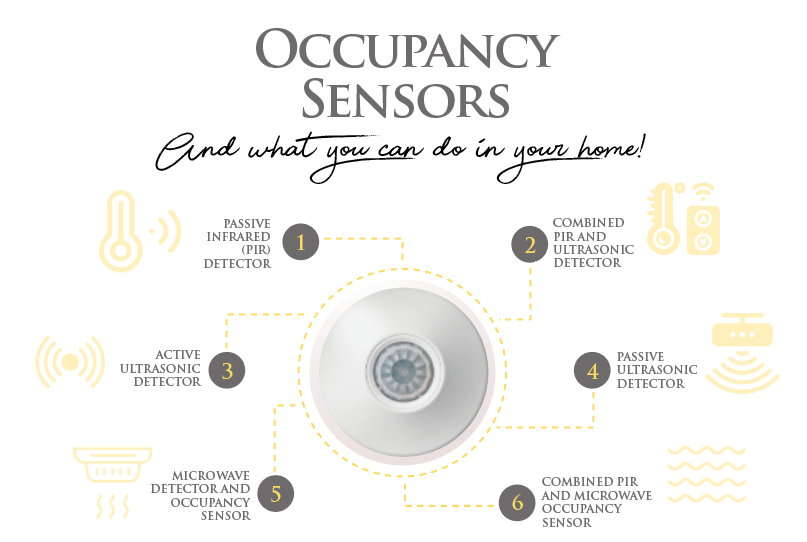 Before getting into the fun stuff, it’s important to know the difference between the new types of occupancy sensors. Some are better for specific devices than others…

According to about half the articles on the internet, occupancy sensors are all about controlling lights.

The OTHER half of articles go on about occupancy sensors and their use in security.

These are two practical and attractive ways to use occupancy sensors in your home…but it’s not all they can do!

Any smart device in the home can be given a command by occupancy sensors. In real-life applications for comfort, security, and sense of luxury in your home, that can means they can…

Added bonus: many of these automations do a GREAT job of lowering your utility bills, too…just think of all that automated efficiency!! 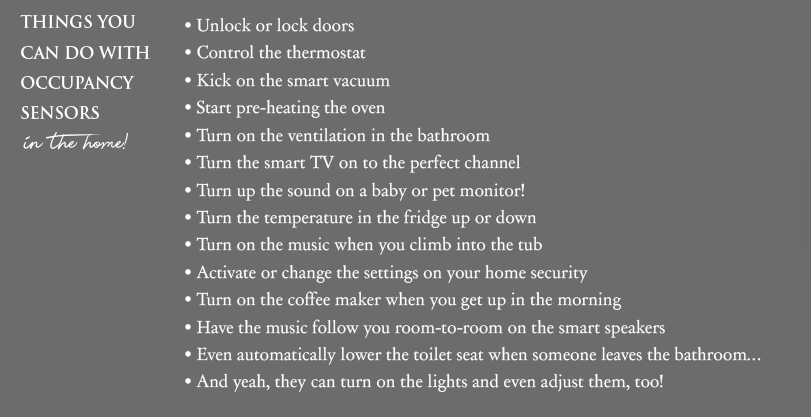 Imagine the music automatically coming on and the lights slowly dimming as you slip into the bathtub…if that isn’t total luxury, nothing is!

These nonobtrusive detectors turn your home into automated indulgence, and they help you be the best homeowner you can be. Your electricity costs come down and you get every convenience you can out of those smart devices!

Which of those 14 uses of occupancy sensors would you love right now? Tell us on Facebook…